With the excitement of the FIFA World Cup all across the world last month, it created an opportunity for one our Beadalon Distributors in the UK, Beads Direct to hold a Beading World Cup competition. We were proud to be the official sponsor of this competition! They opened the contest to all their customers and Facebook Fans to create jewelry pieces inspired by a specific country participating in the World Cup. They received an overwhelming response of entries with remarkable pieces.
Sixteen contestants made it to the first round, where their designs were judged by the Facebook community. Six very talented contestants then made it to the second round. The final winners were chosen by a panel of judges from Beadalon and Beads Direct.
The final winner was Isabela Tanasa representing Greece with her mythological inspired necklace. She chose to create a piece inspired by the ancient Greek god of medicine, Asclepius. The snake is representative of the Greek mythological god and the rod of Asclepius, a snake-entwined staff, remains a symbol of medicine today. 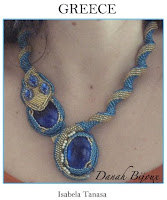 The 2nd Place winner was Gloria Simpson representing Australia.  She was inspired to create her necklace by the "Shades of Uluru" also referred to as Ayers Rock. Uluru is considered one of Australia's most recognizable natural icons. It's natural landform creates the most stunning visual color effects when the sun shines the rock.  Congratulations to all participating in the first Beading World Cup!
-Yvette Rodriguez
Marketing & Events Coordinator